Strawberry Banana Grape is a sativa dominant strain renowned for its fruity genetics, great flavour and powerful effect. I grew it out to see how dominant the Banana OG genetics were when combined with 2 other high flavour strains (Strawberry and Grape). I have a platinum Banana OG mother that I plan to breed with and thought this would make a great Banana OG back cross (BX) project.

This was one of my favourite strains of the 7 other strains I grew alongside it. It grows fast and blooms hard, producing huge rock hard dense buds which are totally coated in resin. I had 3 phenotypes and although slightly different in stature the resulting flowers are very similar in their deep, sweet, tea anise with vanilla terpene profile. 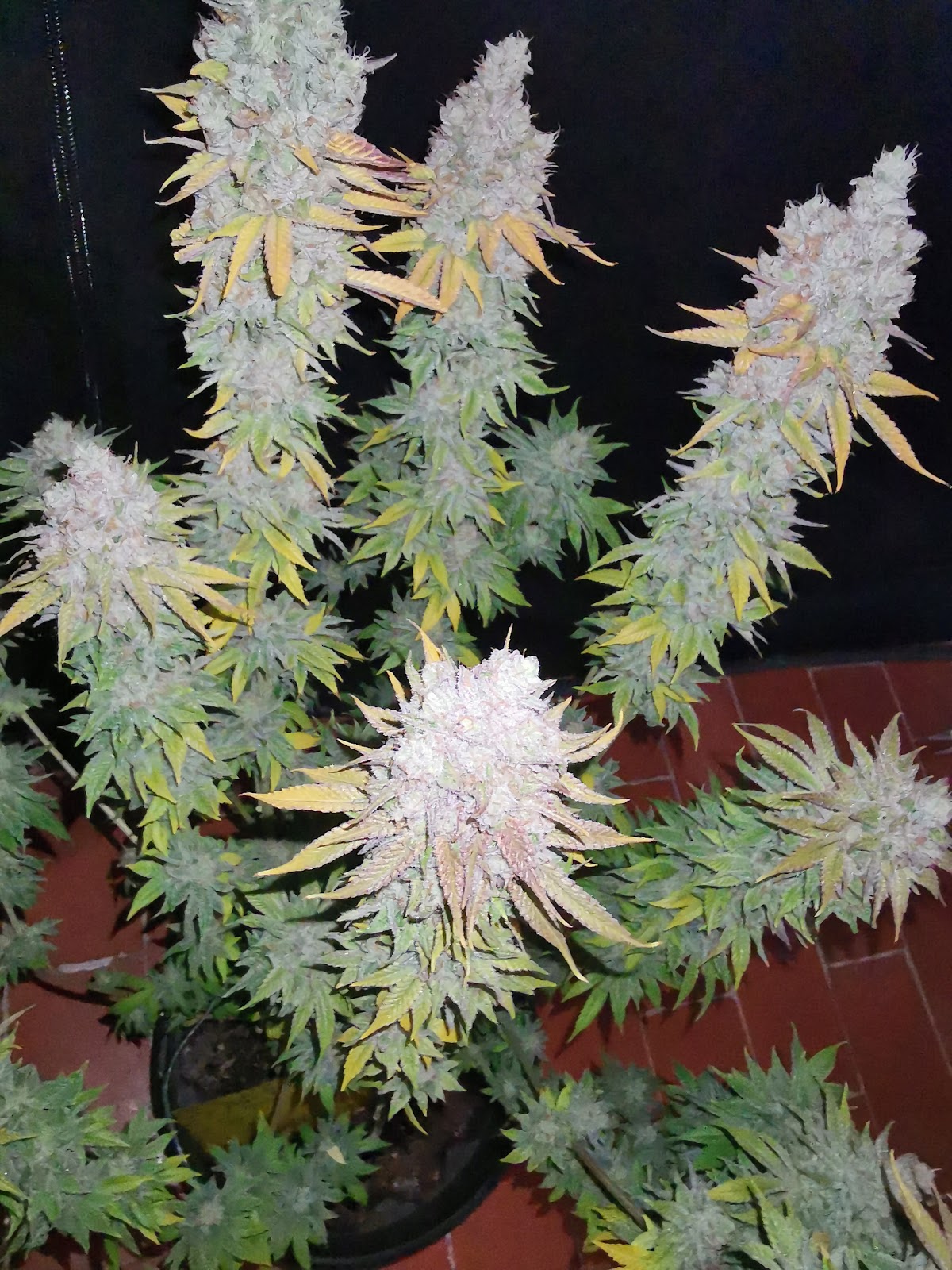 It took 114 days from seed to harvest, but due to me using a new LED fixture which is lacking in IR and far red diodes, all the strains took longer than expected. I also experienced severe heat issues during the vegetative stage which forced me to use low lighting to combat the excessive heat, so veg time was longer than usual.

My standard practice for all my grows is using root pruning pots filled with coconut coir, which is pre-buffered with calmag for 2 days prior to transplanting, and then is inoculated during transplant with Mycorrmax beneficial bacteria and fungi blend. To feed the beneficials i always use humic acid, fulvic acid and kelp biostimulants from Titan Hydro.  I feed them in a run to waste system which sends the runoff down the drain. The plants are topped and trained from early on to force as many flowering tops as possible before they get put into bloom. I grow them under 2 x 640w full spectrum LED lights in an environmentally controlled 2.4m x 1.2m grow tent. I run my lights on at night to combat low night temperatures. I always defoliate regularly to aid light penetration. I foliar feed regularly with stage specific treatments. 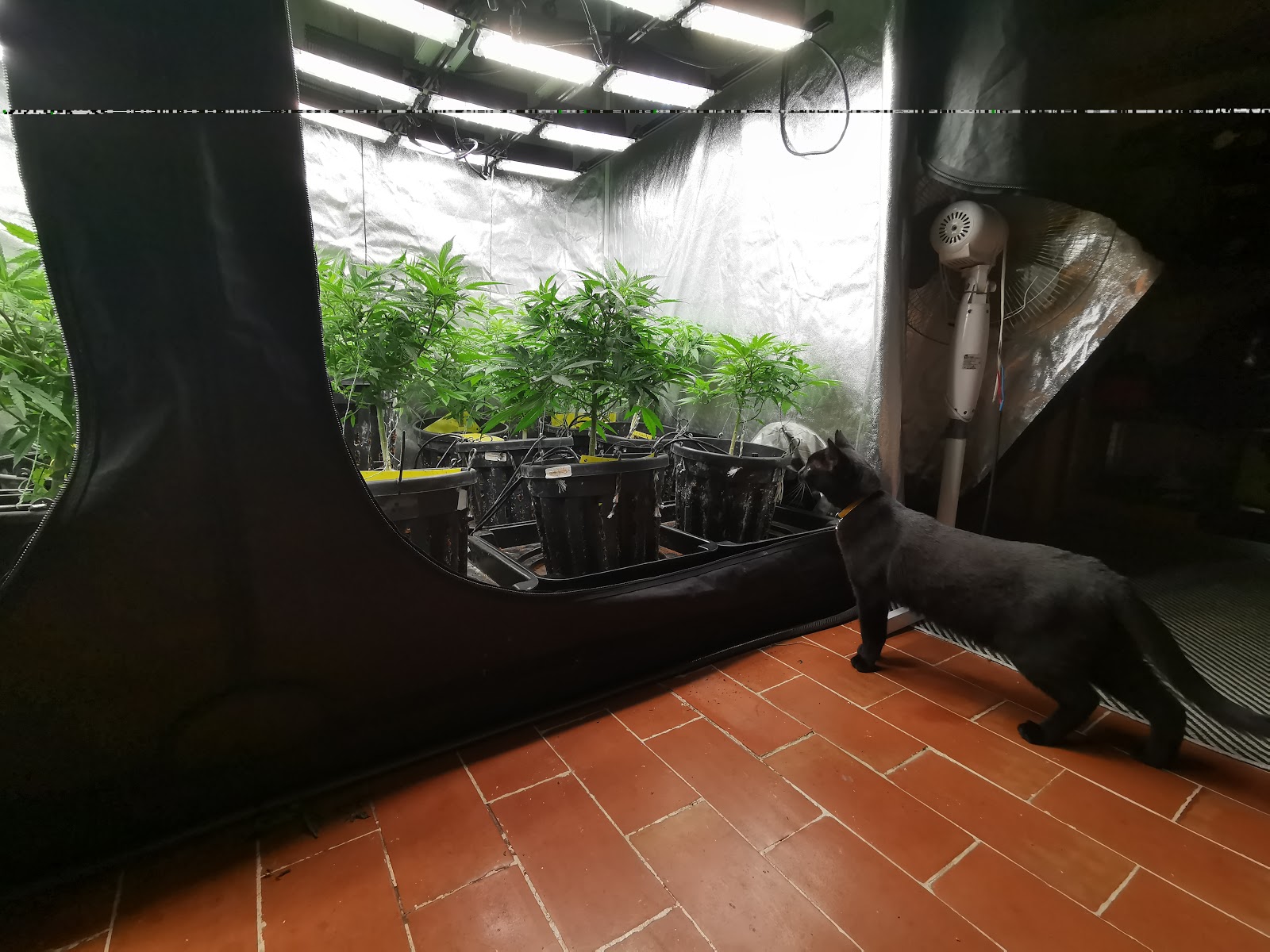 This plant was a doddle to grow, requiring zero special care other than the care given to each plant that I mentioned above. The only thing I did need to do was give her more support earlier than the others due to the dense buds weighing the branches down. As you can imagine, this is a problem I am more than happy to deal with!

This strain is suitable for beginner growers and professionals alike. I plan to run these as a monocrop to enable finding the perfect sweet spot and use cal mag levels to push her to her absolute genetic potential, as I will be keeping her around for a while. It’s hard to tailor your feeds perfectly when running mixed strain grows as some strains like higher feeds and the ones that don’t will suffer.

The plants get wide and stack all the way down the stem with rock hard dense, sticky buds. This is a resin monster: the buds were the first to start resin stacking at week 4 of bloom and didn’t stop till week 8.5, at which point the trichomes just got fatter and steadily ripened changing from clear to milky.  I haven’t made extracts with it yet, but intend to press a few buds into rosin in the near future to try to estimate the resin yield. I would expect it to be above 15% resin.

This was the heaviest yielder out of all the strains in my tent on this run. The average yield was 105g of super dense, super frosty, beautiful textbook-looking buds! The buds glisten in the light and are extremely dense. This is a very impressive strain and I am sure if I ran 20 seeds I’d find more special phenotypes.

It is very easy to trim: it mostly puts out large fan leaves that once removed leave just a few tip leaves to remove. With a quick tidy up they are ready for the dry rack or jars if you dry trim.

This plant’s terpene profile is complex. I suppose I can’t expect anything else considering the heavy load of terpenes inherited from the parents. I would say none were truly dominant in this cross, but instead blended into a deep sweet, but unusual, almost tea anise-like smell. However, it’s not super loud, I’d say 6 out of 10 for terpenes.

The taste is unexpected, a sort of sticky rice, creamy taste with no bitterness, coffee etc. I expect a cure will bring out the more dominant terpenes so I will update this after the buds have cured for some time.

The high is creative, focused, bright!  It isn’t dangerously potent but it has a creeper effect that will put you down if you smoke a few J’s. I haven’t found a ceiling with this strain yet: i can smoke it and feel gradually more stoned, which is pleasing as i get bored of strains quickly once i feel i reach a certain level.  A lot of strains are just pretty or tasty but lack legs in the medical department.  This is a nice strain to work on, it helps me focus and zone into my task.

This is a very good strain and one I feel most people will keep around for some time as a favourite. It could be louder but the terpenes don’t disappoint. It has an impressive resin content and it has some of the densest flowers i have grown in a while. I wouldn’t say it leans to any of its parents in terms of traits except the structure being banana OG-ish. I have a feeling it will make very impressive extracts, something i will detail further later.

Cultivation information, and media is given for those of our clients who live in countries where cannabis cultivation is decriminalised or legal, or to those that operate within a licensed model. We encourage all readers to be aware of their local laws and to ensure they do not break them.

How Growers Can Benefit From The Professionalisation of the Cannabis Industry

As the cannabis industry enjoys a boom – thanks in no small part to the flourishing medical cannabis sector, coupled with the growing legalisation of marijuana across the world – we welcome in a new era for...

Where were we? As usual, let’s do a quick review so you have a proper reference. Below is a view of the girls at the end of week 16. They were just getting their first wind and were not too impressive at that point...

Why grow high CBD strains? I grow high CBD plants to use as medication because I have horrible anxiety! My husband is a cancer survivor, living with chronic back and nerve pain. Using cannabis has thankfully been a...